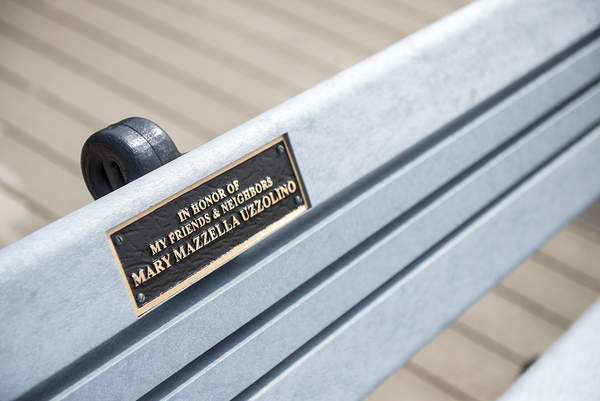 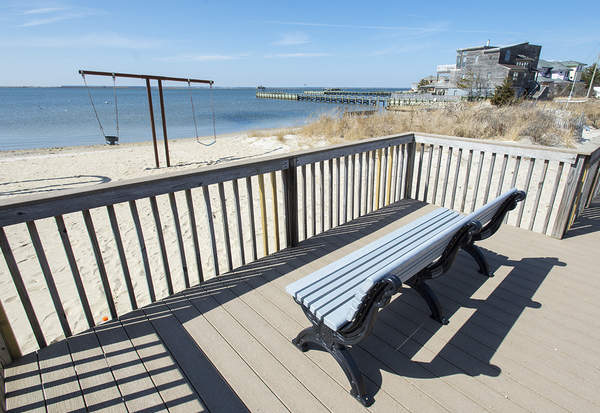 A bench that now sits in the bayfront park on Joan Avenue in Holgate carries a message of solidarity for homeowners who proved themselves “Stronger Than Sandy” – the message Mary Uzzolino had printed on flags she sold to raise money for post-storm rebuilding efforts on LBI’s south end.

Long Beach Township was delighted by the donation, which will go toward the purchase of vegetation for the park, a Green Acres parcel, as well as the memorial bench, outfitted with a plaque that reads: “In honor of my friends and neighbors. Mary Mazzella Uzzolino.”

“I am planning on getting pollinators and native shrubs for a spring planting,” noted Angela C. Andersen, the township’s recycling and Clean Communities coordinator.

“My neighbors in Holgate posted a bunch of pictures of the bench on Facebook for me so I was able to see it,” said Uzzolino, a Springfield resident. “It’s beautiful! I have a 1-year-old son and can’t wait to share sunsets with him on that bench this summer, the way I did with my parents at that same park when I was a baby.”

Uzzolino’s father bought a house on Jacqueline Avenue in Holgate in 1983, and the family spent every summer and countless off-season weekends there. After Superstorm Sandy, in the fall of 2012, “Our hearts were just broken to pieces,” Uzzolino remarked. “My house in particular had an uncertain fate. The ocean picked it up and moved it on its foundation, damaging the foundation and the house. We had no idea if we were going to have to knock it down or if we could fix it and it would be a while before we would know anything. So we just had to wait. I ended up calling it our ‘tipsy house’ because every day it just seemed to sink lower and lower into the sand. ... Every time it was windy or there was a big storm we just had to pray it would stay strong for us.”

In the aftermath of the storm, Uzzolino wanted to volunteer alongside her neighbors and friends in Holgate, but it wasn’t realistic because of her home base and her job, as a creative director in Saddle Brook. “As I sat at my desk I just thought, ‘How can I help from all the way up here?’

“So I threw together a logo and tried to think of a slogan. Then it came to me: ‘Stronger than Sandy.’” (This, she pointed out, “was way before Chris Christie’s ‘Stronger than the Storm’ campaign!”) “I just uploaded it to the Holgate Update page (on Facebook), hoping to get some positive feedback. Immediately people said they would buy merchandise with this logo on it.

“Wow, so I can actually help by raising some money!” Uzzolino realized.

She utilized CafePress to create magnets and T-shirts, and, after a suggestion on Facebook – and overwhelming demand – she created a flag with the same “Stronger Than Sandy” design.

“They didn’t offer (flags) on CafePress so I had to have them custom made,” Uzzolino explained. “A friend of mine, Steve Fritz, who owns SeaWall ARTifacts (in Beach Haven Crest) ,was nice enough to be the pick-up spot for me since I didn’t live down there. Honestly, the whole flag project wouldn’t even have been possible without him. He was there all day, greeting people with a smile and good conversation, digging through boxes of flags that were pre-labeled for people. He didn’t have to do it, and he wouldn’t accept a dime for his efforts. He just wanted to help, and I truly appreciate it.”

When Uzzolino eventually traveled to Holgate and saw the “Stronger Than Sandy” flags hanging outside numerous homes, “that was the moment that I felt like I actually helped the way I originally had intended.

“That was the moment that I was happy for the first time in Holgate, instead of sad and depressed,” she added. “I felt proud, not of myself, but of us as a community. We weren’t victims; we came back. We thrived. It sounds stupid, but they were so much more than just flags: They symbolized strength.”

As Uzzolino explained, she then had to decide how to utilize the money from the flag sales. She emailed township Mayor Joseph Mancini about her idea to help beautify the bayfront park, and he connected her with Andersen.

“I wanted to help restore the park to what it once was so my son, nephews and niece can enjoy it the way I did.” 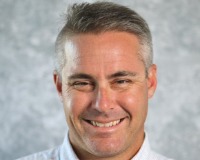 Hello and thank you for visiting my website! My name is Deidre Martin and I am excited to help you find your dream home! I have lived in the area for many years and have an extensive background in rea....