Beach Project Officially Gets Under Way At Ship Bottom Ceremony 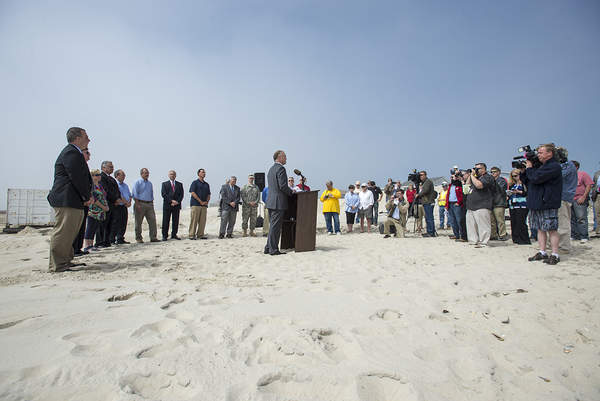 The Christie administration joined with the U.S. Army Corps of Engineers’ Philadelphia District and various elected officials to mark the start of a $128 million contract to complete beach and dune projects for Long Beach Island on May 7.

During a press conference on the beach at Fifth Street in Ship Bottom, numerous speakers said Superstorm Sandy had ratcheted up the importance of Island-wide replenishment. During the event, dredges and various equipment from the contractor, Great Lakes Dredge and Dock Co. of Oak Brook, Ill., were clattering in the background as sand was being pumped.

“At first, people thought that replenishment was just going to protect some expensive beach homes,” said Ship Bottom Mayor William Huelsenbeck. “Sandy sure answered that question. The stakes became a lot higher. We had an obligation to protect not just the Island but the backbone of Ocean County.”

According to the project schedule, the work in Ship Bottom will be completed by early June. From then to September, replenishment will take place in Long Beach Township from 106th Street south to 13th Street. The dredge will pump sand on the beaches in the township from July to October.

“Work will be done in small sections of no more than 1,000 feet of beach at a time in order to minimize any disruptions to residents and visitors,” said Bob Martin, N.J. Department of Environmental Protection commissioner, adding that beachfill work is expected to take place at the rate of about 100 to 250 feet per day.

Martin said the beach berm will be built up to approximately 8 feet above sea level, and the dune system behind the beach will have a top elevation of about 22 feet. He said this is critical for the protection of property, infrastructure and lives.

Col. Andrew Yoder, deputy commander of the Army Corps’ Philadelphia District, said 8.2 million cubic yards of sand would be pumped in from the ocean floor.

“That’s enough to fill Lincoln Financial Field eight times,” he said in reference to the football stadium of the Philadelphia Eagles.

In addition to the DEP and the Army Corps, the federal Bureau of Ocean Energy Management is also involved in the project. Last summer, the three agencies came to an agreement to make the sand available from federal offshore waters.

“Hurricane Sandy left a mark up and down the East Coast,” said bureau Director Abigail Ross Hopper in a press release. “With the sand resources now identified, this agreement reflects BOEM’s continuing commitment to work with New Jersey to help coastal communities recover from Hurricane Sandy, and enhance resilient efforts for the future. We are committed to working in a collaborative effort to help local communities withstand damage from future storms.”

“We all witnessed how the engineered beaches and dunes in Surf City, Harvey Cedars and a part of Brant Beach survived the wrath of Superstorm Sandy and protected the properties to the west of them,” said Long Beach Township Mayor Joseph Mancini. “The remainder of LBI will have the same security and peace of mind. I would like to thank the DEP, the Army Corps, our legislators and Island municipalities, who have worked so hard collectively to bring this project to fruition.”

Congressman Frank LoBiondo (R-2nd) said, “To do this right, everyone all had to come together. We hope that Sandy is the last storm to hit the Island, but that is not likely going to be the case, as we will probably face another one. But now we will be more prepared for it.”

Watching the proceedings was nearby oceanfront homeowner Joseph Barrett, who said the current project ripped out his bayberries, Ragusa roses and beach plums that grew along the dune.

“My dune is flattened. It looks like a desert,” he said.

While numerous speakers talked about how Sandy created a sense of urgency to get the project done, Barrett takes a different tack.

“Sandy actually proved that we had a strong beach and dune system,” Barrett claimed. “There were no blow-outs or breaches. The flood damage came from the bay, not the ocean. None of the homes on the oceanfront sustained damage.”

He added, “With all my plants taken out, my dunes now are probably weaker.”

The factual record of Sandy is different. On Oct. 29, 2012, the dunes were breached or overwashed at countless streets from Holgate to Loveladies, and were virtually swept flat in Holgate and much of Beach Haven. Dozens of oceanfront homes were damaged, although there was far more substantial flood damage or destruction to LBI homes at elevation lower than the oceanfront.

To Search for homes in Ocean County, click here  http://kpileggi.vandykrealestate.com